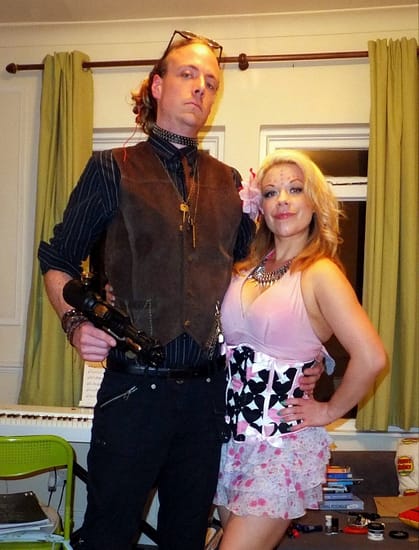 Last weekend, after an amazing all-nighter rave called Rumpus, I heard about another all-nighter called Imaginarium – a sci-fi/fetish themed event. This one, unlike most of the others, required some sort of effort be put into your costume. At previous events, considering I’m living out of a backpack, I hadn’t bothered to get dressed up. I wish I had, because I always felt out of place, but it was always fun nonetheless.

But for this one I got excited about the idea and decided to go steampunk. Since steampunk is hard to explain, check out the wikipedia article on it if you’re not familiar with the style or do a Google images search.

Little did I know how into it I’d get. I spent the next four days going around London looking for clothes and accessories. I didn’t have time to shop online for the stuff, so everything I got had to be local. Charity/thrift shops were a lifesaver, as were the pound shops, and Camden markets helped out a lot. Steampunk is damn hard to do on a budget, but with some creativity and especially by not buying anything that says “Steampunk” on it, it’s possible to whip up a pretty good outfit.

Here’s what I ended up getting. Although it didn’t turn out perfectly, I think I did alright given my resources and time given. I’ll list what I got an how much it cost.

I started off in Tooting Broadway (SW London) which has a few pound shops and a couple charity shops. I did a little bit of research online to get an idea of what I’m supposed to get, but didn’t really know what look I was going for. The first charity shop I stopped by I found a pair of shants (shorts/pants) that looked the part, along with a cool leather purse:

I figured I could distress the purse with sandpaper and rough it up a bit for that vintage look.

From there, I walked down the street to the Oxfam charity shop and found the perfect waistcoat for steampunk:

Very high quality heavy leather. From there I decided I was going more for the cowboy steampunk look. For £8, you couldn’t beat it.

I also bought a pair of trousers at Oxfam, unrelated to Steampunk, which will go in the “collateral damage” section below.

I looked around at shirts but didn’t find anything that interested me yet.

From there it was on to Poundland, where I bought some sandpaper to rough up the purse and whatever other leather I thought was too shiny.

Next stop – Primark. For those in the States, Primark is like a huge version of Wal-Mart’s clothing section. Very cheap, disposable clothing and filled with “interesting” characters.

I looked for anything I could use for the costume here, but ended up with some accessories:

Various leather straps, jewelry, bracelets, etc. The bracelet in the upper left was actually from the first charity shop I went to; the plan was to paint the white stones with black nail polish. The rest is from Primark.

The strap in the middle is to go along with the fetish part of the theme (as a choker) and the women’s belt I planned to unravel and use as thin leather straps for my hair. I still wear some of the bracelets on the left.

So now I’m starting to get an idea of how things are going to pan out. I still need a shirt, plenty of chains, cogs, a pocketwatch, and I wanted some old gate-style keys.

I spent the next few hours walking down high street from Tooting Broadway to Clapham Common, stopping at every charity shop and DIY store I could find.

I picked up a few things along the way:

Those are the closest thing that resembled cogs that I could find, and they looked pretty cool.

I didn’t have much luck finding anything else.

Camden, of course, was the place to go for this kind of stuff. The next day I headed up to Mornington Crescent Station and took the walk up high street stopping at all of Camden’s thousand or so charity shops, ending up in the markets.

That tie was perfect – it’s vintage, thin, and already a bit distressed. I could also use it again if need be. The pendants were from a bric-a-brac store, and were bought in case I couldn’t find anything else.

After a long search, I wasn’t able to find any reasonably priced goggles, so I bought these sunglasses which were the closest thing I could find.

I planned to use the belt as an arm strap and in one of the charity shops I found a big belt with those chains on it. I didn’t want the whole belt so I asked if I could just buy the chains off of it for a couple quid. The worker said he didn’t see why not; they could still sell the belt for a little less. SCORE! Those thick chains were exactly what I was looking for.

The one thing required in every steampunk outfit – a pocketwatch. Camden has loads of them. I stopped by a few places and got an idea of pricing. I ended up going with this one, which was pretty unique from the rest, and ended up befriending the cool Lithuanian girl who sold it to me.

I bought a couple strips of leather and a couple of the thickest chains I could haggle, which were still pretty thin. But you can’t have steampunk without chains.

The pocketwatch ended up falling off at the party. I only attached it by two safety pins, which apparently weren’t up to the task.

I never did find a good shirt to use, so I ended up wearing a shirt I already had:

I didn’t originally plan to do a steampunk gun; they’re a pretty intensive and typically expensive project. But I found the perfect water gun at Poundland and decided to go for it.

The candle holder on the left I planned to unscrew and glue the end of it into the tip of the gun’s barrel. Trust me it looked cool. And Mary could always use it after all of this, so it wasn’t a waste.

The gate keys in the middle I ended up finding last minute at a DIY shop and they ended up on those two chains from before and going around my neck.

And seriously, isn’t that gun perfect? I had quite a few plans with it but ended up going a simpler route, at least for this party.

Although spray paint here is horribly expensive, I found some black matte primer and nail polish at Poundland, and some more polish at Primark, which made a PERFECT old brass color on the plastic.

The styling wax is for my hair, which I had big plans for based on some pics I found online, but didn’t work out as I’d hoped.

What followed was a full day of obsessively trying to get this gun looking good. I watched the following Youtube video which set me in the right direction:

I sanded and sprayed the gun, got to painting it, and it took way too long. I was in a rush since the party was that night, and never ended up finishing it in time. The furthest I got you can see in the picture below.

What you see to the right is the (nearly) final outfit including the not-so-finished gun. There are still a couple things missing (like the roughed-up purse and arm straps,) but it’s mostly complete.

Mary went as a pixie, which she’s good at pulling off as you can see.

The Imaginarium party was a blast, and if I’m around during the next one I’ll definitely go. I got a few positive comments throughout the night, and I’m really glad I actually did a costume. It was quite a bit more fun than I expected it to be putting everything together and figuring out what goes well together, and the creative process of taking stuff meant for one thing and turning it into something else.

I got slightly obsessed with the gun and was disappointed when it didn’t work out, but I should have given myself more time with it.

Now what I’m going to do with the costume? No idea. I haven’t worn it since; it’s festival season right now so there aren’t any fancy dress all-nighters to go to any time soon.

Since the party, I ended up buying some proper goggles and a replacement pocketwatch from eBay, which totaled something like £7.

So, how much did this outfit cost in total? I never did end up finding cogs, which is disappointing, but I could have bought some online had I more time to complete it.

Oh…ouch. That was quite a bit more than I expected, actually, but goes to show you:

Still though, I saved a lot doing it myself compared to buying stuff that says “Steampunk” on it or going full professional.

In addition to the cost of the outfit, I bought a few things in shops along the way that I otherwise wouldn’t have:

I couldn’t help buy get the Alien Quadrilogy – it came with something like 9 discs and cost £10. The other DVDs I wanted to get for Mary and I to watch, and the CDs were 10 for £1 – can’t pass up that deal.

I also picked up some trousers at Oxfam I otherwise wouldn’t have got, unrelated to this costume.

Have you made your own steampunk?

If you’ve ever put together a costume like this, especially Steampunk, I want to hear from you. Any tips or tricks you could pass along to help someone get it done with less money?

Finally, what do you think of what I put together?