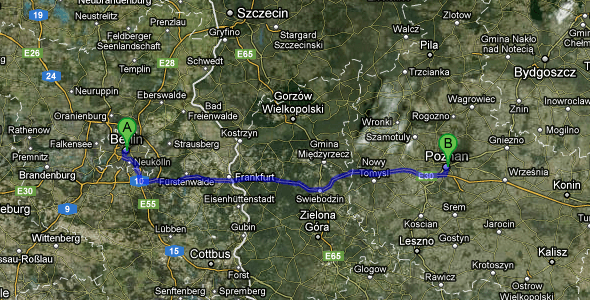 I’ve been in Berlin now for 12 days or so, and I’m totally not ready to leave. I absolutely love it. But I know I’ll be back when my friends come to visit (if I don’t end up moving there first,) so it’s time to explore another place.

I met a cool Polish gal, Marta, at the Black & White Hostel in Milan last month, and we’ve been keeping in touch. Turns out she only lives a couple hours drive away in Poznan. So, last minute as usual, I’m off to Poland.

I’d like to explore more of Germany first, but: A) I’m close, B) I’ll be back to Germany for sure, and C) I’d like to buy some typically expensive shit, and Poland is even cheaper than Germany. Plus, I have to be in London by the 19th for a few concerts I already have tickets for (article forthcoming.)

Saturday works best for both of us. Checking my usual cheap-transportation routes, I’m only able to find a couple rideshares on BlaBlaCar and Carpooling.de, and they’re going for €15-20 ($20-26.) I send out a couple emails, get a positive response on the best one, showing up in Poznan right after Marta gets off work (she’s a Molecular Biologist – how cool is that?) A quick check on the trains show they’re going for around €35, so rideshare is the best bet.

I book my Ryan Air flight from Berlin to London for €37 ($52) for next Thursday and go out to explore more of Berlin on foot, including one last trip to the absinthe bar.

I get an email from dude, saying he’s not going to Poznan after all. Sweet.

A bit of searching on the Googles turns up a bus service called PolskiBus going from Berlin to Poznan on Saturday for 65zl (that’s Polish Zloty,) which works out to about $20 each way. Nice. The ride takes over four hours, which is much slower than a regular drive or train ride, plus it gets into town 3 hours before Marta gets off work, and she can’t get off early. But when on a long-term backpacking trip, cheaper is almost always better – convenience be damned. Booked.

Some nighttime exploration with a group of French people lands us in an underground gallery filled with GWAR-style moving and singing robots laying down some industrial music, a creepy abandoned ice factory on the river about to be knocked down, and a very cool hacker’s lair and bar called c-base, which is styled after a very sci-fi-looking spaceship. Read more about c-base in my last article: c-base Spacestation. This place is actually pretty badass. “Ein bier, bitte…”

Ugh…very little sleep, slight hangover. Eat, piss, smoke, brush teeth, get everything together, run to post office to mail some stuff back home, run back, rush to bus station – barely made it in time for the 10:30 departure (mainly because I had no idea where the fuck I was supposed to go.) Luckily, the bus station was pretty close to the hostel. I’m on the bus as I write this, having passed the German-Polish border about an hour ago. We stopped in a small town for a half hour and I stopped into a fancy restaurant, had a nice bowl of beef dumpling soup and a large beer for about $4.50 – that’s what I’m talking about.