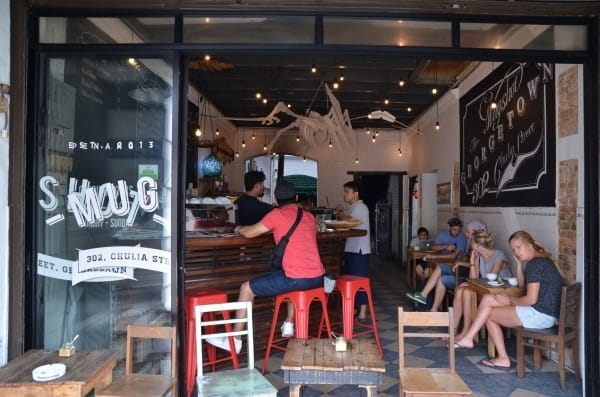 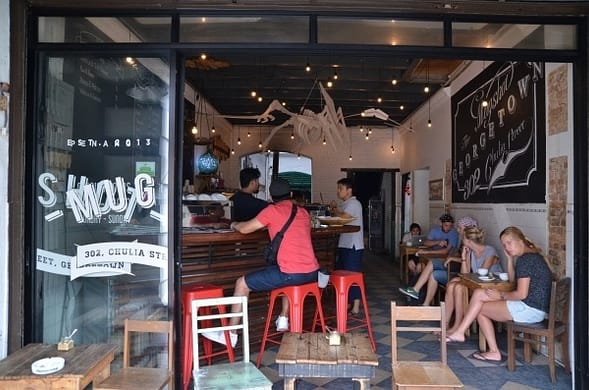 Especially in Southeast Asia, traveling as a digital nomad it can be difficult to find good, comfortable places to work from. First of all, the internet in most places simply sucks. Don’t assume because they have a “free wifi” sign out front that you’ll be able to use it; many times it’s too slow to browse the internet, so forget about getting any actual work done.

I just spent a few weeks in Penang, Malaysia, with a base set up in a cheap guesthouse. As usual, I spent over a week trying out new places and becoming frustrated at the unreliable internet, and other places with good internet didn’t have the environment that makes for a productive workday, or they don’t have wall plugins to stay charged, or the coffee sucked, and so on.

But I did manage to find three places in historic Georgetown, Penang that ticked most or all of the boxes – good wifi, good coffee, wall plugs, and a nice atmosphere to focus. Keep in mind these places are more pricey than your local places, with prices for an iced coffee around 10 Ringgits ($2.80 or so) while local places will easily be half that price. But you’re paying for the atmosphere and the coffee and wifi, after all.

UPDATE 07 August 2017: According to a comment below from Andre, Budan’s Brew might not have wifi anymore, instead encouraging people to talk amongst themselves. Who do they think we are, extroverts?

Budan’s is by far my top pick here, and I came here nearly every day. The owner is awesome and speaks perfect English, the staff is nice and helpful, the coffee is great, the wifi is solid, and there are wall plugs at nearly every table. There’s also an air conditioned room for when the heat is getting to you, and they have a place to fill up your water bottles with cold drinking water.

The food is pretty good, if a little pricey for local standards, but not terrible either. They offer a wide variety of warm and cold drinks, and you can tell really care about the quality. The drinks are reasonably priced.

I came across this place accidentally as we were walking around close to the guesthouse. It’s located off the main street a bit (and a bit hard to find if you don’t know where it is) so it’s quieter than many of the other options.

If I have one complaint about the place, it’s that they close too early. Sun-Thurs they shut their doors at 5pm – I tend to work later in the day, so I usually start there and move on when they close. Friday & Saturday though, they reopen at 7:30pm and stay open until 11pm, which is nice.

I came across this sometimes hard to find spot from a review online, and glad I did. The staff is really friendly, they play good music, has a nice atmosphere, and the coffee is really good. If you want to try some super strong coffee, get their cold brew Battery Acid (or something like that) – it’ll kick your ass. They specialize in churros and cronuts – a surprisingly tasty combination of a Croissant and Doughnut.

The wifi can be a little spotty from time to time so if it gets really slow or you can’t connect, move closer to the router (in the front) and/or ask them to reset it. The toilet, if you’re not used to it as a foreigner, is squat style.

This was my first choice when I first came here, but after having visited a few times a couple things started bothering me. Don’t get me wrong, it’s still my #3 choice and a good place to work. The coffee is exceptional and they’re open until midnight. The scene and atmosphere is a little more transient than the others since it’s right on Chulia Street in the thick of it – lots of people coming and going, especially in the evenings.

Wifi is good; there were a couple times it dropped out but always came back. Food choices there are varied and the bagels are really nice. It’s quite a long place – there’s the main front room which has three small tables with outlets, then a large back table that could be a great working area but only has one outlet but the power plug kept falling out, so if you go there, make sure you have some charge in your laptop. They also have a foosball table in the back room and a cool eyeglasses in the back. The tables up front seem like they’re made for children so they’re not particularly comfortable to sit on for more than a half hour or so. That’s the main reason I don’t go there more often. Also if you’re here later and don’t want a caffeine overload, a basic juice will set you back 12 Ringgits, which is about 3 or 4 times that of the local prices, and there’s nothing special about them.

There are also cheaper, more local style places all over the city, most of which offer wifi but not all actually work.

While Georgetown isn’t the best place to work as a digital nomad, it offers a few good options for a short stay.

There is a new coworking space called @CAT, started by the Malaysian government to promote entrepreneurship and small business, so check that out as well. I didn’t have the chance to work there but did stop by, and it looked nice.

7 Replies to “The Best Cafes to Work from in Georgetown, Penang, Malaysia”