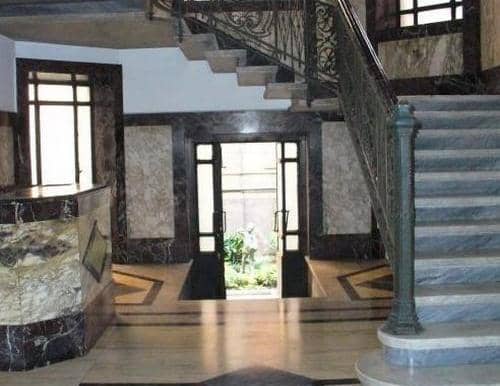 I’ll admit, my first impression of this place wasn’t so great. It was late at night, I couldn’t find it, and the only identifier that you’re in the right place is a small sign on the intercom, which you have to call to get in each time. The hostel itself is all of about one hallway with four dorms and two bathrooms, no common room or kitchen, no lockers, and is often noisy at night.

What it does have is a great and super helpful two-guy staff who are there 24 hours (although sometimes not available,) a refrigerator, a couple outlets per room (which is more than I can say about some hostels,) great showers with hot water, and it feels safe. The building itself is nothing to speak of, but inside, the foyer and hallways are covered in marble with spiral staircases and nice artwork. Not bad to look at.

I originally stayed two nights here after getting into Milan, spending all of €10.20 a night (on special through HostelBookers.) I stayed in a dorm with two awesome Polish girls who I ended up becoming friends and keeping up with, then decided to extend my stay for three more nights to get some work done and see more of Milan, since I can totally afford €10.20 a night for a while.

The next three days weren’t quite as pleasant as the first two; the mixed dorm was full each night, housing various folks who weren’t exactly quiet. Any hostel can be like that, of course, but the problem is that anything that’s done in the hallway is highly audible in the rooms. If you’re a backpacker, you’ll likely have earplugs and a sleep mask – and you’ll probably need to use them. It only has two bathrooms, and although they’re nice and full featured, they have to accommodate everybody staying there, meaning there can be a wait every morning. Since they don’t have lockers, you’ll need to use your luggage lock to keep your stuff safe. Anything of particular value can be given to the staff, which will keep it in the private room. Regardless, I never felt unsafe here, and didn’t even feel like I needed to lock up my stuff.

Smoking is done out the windows of the hallway, which is nice for smokers like me since we don’t have to go outside and call the intercom to get in every time I want a cigarette, but if you’re a non-smoker, keep in mind you’ll probably smell it, especially at night. It’s not lingering, as the windows tend to be open, but if you don’t like the smell at all you might want to stay somewhere else. For me, it worked out nicely. Yeah, good for me.

Overall, and especially based on price, I’d totally stay here again, and probably will when I come back through Milan. The staff (Roberto in particular) is great and extremely helpful, and it’s a few minutes walk to the Rovereto metro station (M1 Redline) to get anywhere within Milan. You won’t find a lot of nightlife or fancy restaurants within walking distance, but it doesn’t take a long Metro ride to get almost anywhere. Despite having plenty of nitpicks to bitch about, it’s a great, small, and flexible hostel to stay at for a few days, especially if you can find it on special.

No comments yet
hostel review