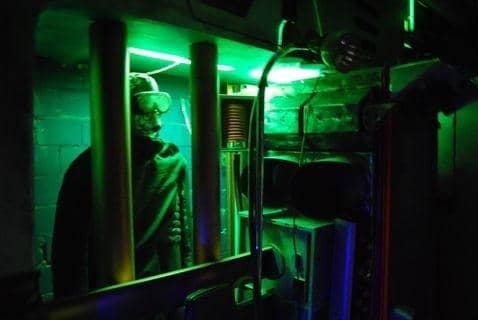 Berlin has so many cool underground treasures – stuff you’ll only find if you know a local. That’s the beauty of backpacking vs. tourism – I could check into the hotel and see all the stuff in the guidebooks then move on, or I could get to know some badass locals who take me to cool bars with no signs outside, underground rave clubs, climb walls to explore an abandoned ice factory, and hang out in a hacker’s lair/spaceship. In Berlin, I did both. After hanging out with my hostel’s receptionist one night where she showed me a few very cool places, I took a tour the next night. Yes, normally that’s not my thing, but Berlin brings the idea of knowing a local and joining a tour together and offers “alternative” tours that allow the guides, who are all (very interesting) locals, to take you wherever they think are the coolest places in town.

At the end of the tour, we end up at c-base – a “hacker’s lair” and bar, which is styled after a very sci-fi-looking spaceship. Turns out many of them genuinely believe they’re in a spaceship from the future, buried underneath Berlin, and that Berlin’s popular TV Tower is an antenna use to communicate with aliens. Yup, they have maps, diagrams, everything:

To give a little bit of background, here’s a quote from Wikipedia about c-base:

The location for c-base is accompanied by a myth. This myth says that there are remnants of a space station called c-base underneath the city centre of Berlin. The space station’s antenna is the Fernsehturm Berlin, a large spire with a mirrored ball near the top and a distinctive landmark nearby.

According to the stories of the members of the c-base, the space station crashed due to unstable conditions in its orbit after exiting a time warp. At that time there was a number of highly technological advances and heretofore undiscovered lifeforms aboard the station. Much evidence of its existence is said to be in and around Berlin, including the aforementioned antenna, which was (according to stories) unmasked by East German and Soviet scientists. Other evidence, such as the multifunctional space station module, which ejected during the crash, is now under intense research and makes up the current premises of the c-base association.

A tour of the members-only area revealed a surprising amount of people working on electronics, programming, building stuff, and more than a couple rooms filled with pot smoke (I’m sure it was just incense,) beer, and gamers PvPing with some FPS I couldn’t recognize. The coolest part: the doors open and close with the comforting “ahhhhh” from Hitchhiker’s Guide to the Galaxy. Despite the “out there” thinking of some of the members, this is a super cool place to hang out, even though we had to pay the more expensive “Alien” price for drinks.

During the tour we were allowed to take pictures of anything “non-organic.” Except this little guy, who we were informed after asking that we could photograph him since he was sleeping and therefore wouldn’t attack us. Well that’s good:

If you’re in anything related to the tech industry, this place is your hangout. The local Wikipedia chapter meets here regularly, Mozilla (the Firefox folks) have been known to hold meetings here, and there are all sorts of events held here within the tech industry. If you’ve even been known to stay up until early morning hacking, gaming, or coding (who, me? no…) this place could hold you captive for days at a time. In fact, one of the members told us they had to implement a “no sleeping” rule because some of the guys would never leave. I could see that. That could also be the reason there was an impressive collection of empty Club Mate bottles sitting around.

Oh, and in case you didn’t already guess, this is not the place to go to pick up women.

If I lived in Berlin, which I seriously considered after spending a couple weeks here, I could see hanging out at c-base quite a bit, which may not come as a huge surprise to those of you that know me well.

Check out all the photos below. Some of the pictures are from various sources around the internet and some are mine. If you’re ever in Berlin, make sure you visit c-base at least once, and try to get a tour from a member, it’s worth seeing.